How do we measure the metrics in Trengo analytics?

Within Trengo Analytics, there are multiple reports that give insights into the number of conversations, their statuses, and the productivity of the organization. In this article, we'll explain how all the metrics in these report are measured.

In Trengo, a conversation can have three statuses: new, assigned, or closed. All of these statuses are reflected upon within analytics.

In 'new', you will find the number of new conversations that have arrived in the inbox in the selected timeframe.

Within the inbox, it is possible conversations get reopened and therefore regain the "New" status in the inbox. 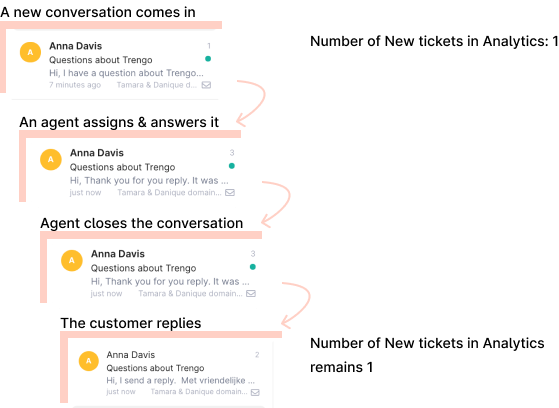 In 'assigned', you will find all conversations that have or have had the status "assigned" during the selected time period.

In here, a conversation will be counted only once as well, even when it switches from user or when it gets reassigned after closing.

In this example, the following happens: 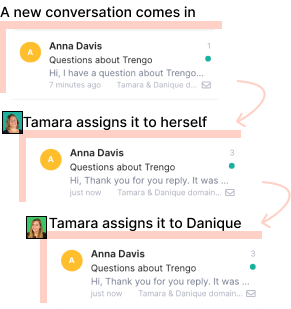 In Trengo Analytics, this conversation will be counted as Assigned under the name of Danique.

In 'closed', you will find all conversations that are closed in the selected timeframe which still have the status 'closed'.

For example, the conversation from the image under "New" will not be counted as closed, as it no longer has the status closed. However, as soon as it is answered and re-closed, it will be counted in closed again.

Aside from giving insights into the number of conversations, you can also find data upon the performance of the inbox. Think of statistics such as the average resolution time, or what was the first response time, and how many answers it took for a conversation to be resolved are shown within the resolution report.

The 'first response time' measures the time between the first incoming message from a customer and the first reply from a Trengo user. Time outside business hours or spent talking to a chatbot or flowbot is not counted within this metric. 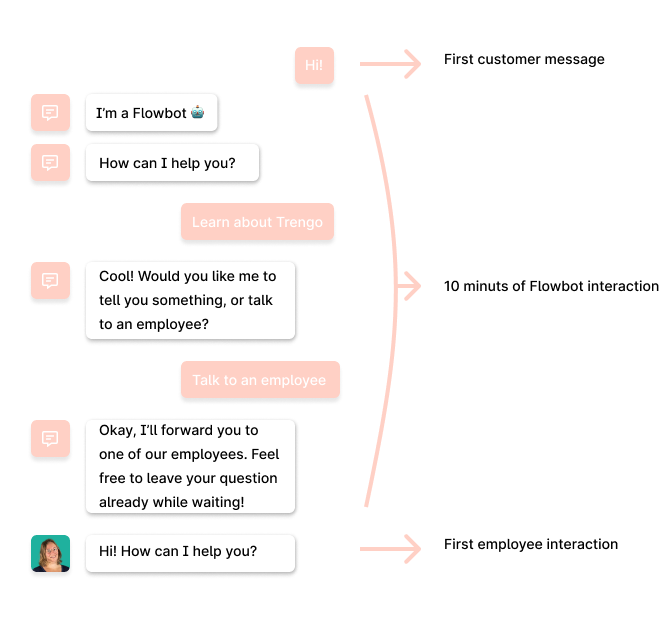 In the analytics, you will see the average first response time for the metrics you have selected. This means that this is the sum of all the first-response times of the relevant conversations, divided over the number of conversations.

The resolution time of a conversation is the time between the first message and the conversation's closing time.

Here, the time a customer was interacting with a chatbot or flowbot or the time outside opening hours is not counted.

So looking at the image from the first reply time, imagine the conversation gets closed 10 minutes after what you see there. The resolution time for that conversation would be 10 minutes.

How about conversations that reopen?

For your email and social messaging channels, you can enable Trengo to reopen conversations once a customer contacts you via the same channel. How does this relate to the resolution time of that conversation? 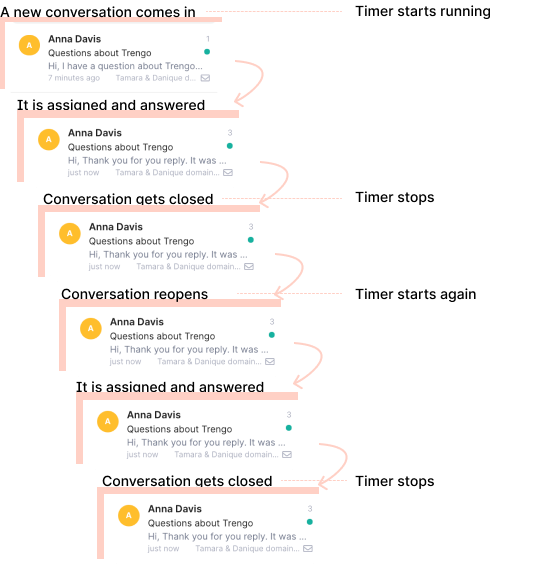 Number of replies until the resolution

The 'number of replies until resolution' simply counts the number of user replies within a single conversation until it is closed. Automated messages via a flowbot, chatbot, or rules are not included.